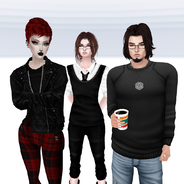 L-R: Joan Bloodwren, Slash, Harsh of the Bard Gang. Made with IMVU.

The Bard System is an American binary system featuring Harsh, the core, and Joan Bloodwren, his headmate.

HarshLightOfDay, or Harsh, is the system core and is a 27 year old human. He was assigned male at birth and uses he/him pronouns, but considers himself genderfluid. Before Joan solidified, he notably had imaginary friends past what could be a socially acceptable age and partook in "rituals" to create them with childhood friends to share, similar to the practice of thoughtforming.

Joan Bloodwren is the only other headmate of the system at this time, appearing as a human woman. She was assigned female at birth (she/her pronouns), and appears to be around Harsh's age or slightly older, but has memories totalling around 200 years.

Slash is the self-described "system facilitator", who takes care of tasks such as cleaning. Generally, Slash is the name given to the body on 'autopilot', doing things automatically. Unlike Harsh and Joan, Slash does not swear and is prone to body language akin to a Vulcan from Star Trek, although they liken themselves more to the EMH/Doctor from Star Trek Voyager specifically.

A temporary fusion/blending of Joan and Slash, he was a combination of Slash's detachment and lack of feeling but also Joan's cynicism. He has not been seen since February 18, 2021, although the system believes he may reform again.